Yesterday, Hellenic Aerospace Industry welcomed the 138 hard-working mothers of the company, with gifts and flowers. The event, which was organized in their honor at Tanagra’s facilities, was entitled "Mum's the word!" and was dedicated to the International Mother's Day.

For HAI, the country's leading defence industry, working mothers have a special place, as they combine increased professional skills and the support of family and children. A key concern for the Hellenic Aerospace Industry is to stand beside them, assisting them in the multiple roles they are called upon to serve.

The most touching moment of the event was when Mrs. Maria Tryfonidou, president of the Association of Parents of Children with Cancer "Floga", spoke about her daughter who was defeated by lymphoma. Mrs. Tryfonidou with her endless social contribution was herself an employee of HAI, with her colleagues standing by her in all her difficult moments.

Yesterday, management and employees, united, supported the mothers of HAI.

The chairman of the company, Mr. Ioannis Koutras, promised that much more will be done to improve their position: "We express our love to mothers, to mothers all over the world, and we pay tribute to them, but especially to the mother employee of HAI".

The CEO of HAI, Mr. Dimitrios Papacostas, spoke about the value of the working mother: "The mother is the indicator of our course. Anything that affects the mother, anything that affects the family, which is the core of society, affects society, so any actions and interventions we do for women must be guided by the reconciliation in practice of motherhood with work."

Τhe regional governor of Central Greece, Mr. F. Spanos praised the role of the working mother, as well as the president of the Employees' Union of HAI, Mr. N. Kapiris.

Mr. Charles Akers, who represented Lockheed Martin and the vice-regional governor of Central Greece, Mr. Yannis Pergantas honored with their presence the event, while the social worker Mrs. F. Gerochimona spoke on behalf of the Center for Counseling Support of Women Victims of Violence of the Municipality of Chalkida.

Best wishes to all the mothers of the world from HAI! 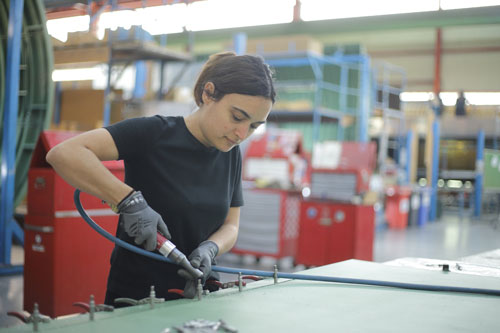