Today, the Deputy Minister of National Defence, Mr. Nikos Chardalias visited the Hellenic Aerospace Industry (HAI) facilities in Schimatari and was informed about the progress of the programs and their successful implementation. The Deputy Minister was accompanied by the Chief of The Hellenic National Defence General Staff, General Konstantinos Floros and high-ranking Ministry officials.

HAI’s executive team presented the progress of key-programs, essential for the national defense. Among them, is the upgrade of the Hellenic Air Force fighter aircraft F-16 Block 52 Advanced and 52+ to Viper, which constitutes a priority for the Hellenic Aerospace Industry. It is a huge challenge that offers to the Hellenic Aerospace Industry a comparative advantage within the international markets. The programme is being carried out in accordance with the tight schedules and so far nine aircraft have been inducted.

The P-3 Orion maritime patrol aircraft upgrade program was also presented. Together with the intermediate solution aircraft, which has already been delivered, Ρ-3s will enhance the Hellenic Navy's ability to carry out patrols, reconnaissances and anti-submarine warfare.

At the same time, the implementation of all programs undertaken by Hellenic Aerospace Industry is accelerated, while the company is focusing on new products design. The development of Unmanned Aerial Vehicles (UAVs) funded by the Ministry of Finance has already started, while, in cooperation with the Ministry of Digital Governance, the company enters the field of satellite systems.

In 2021, HAI strengthened its manpower with 420 employees, while an additional 350 recruitments are planned in 2022.

The Deputy Minister of National Defence, Mr. Nikos Chardalias, during his visit to the production areas, expressed his satisfaction for the work being done in HAI and the significant efforts made by HAI’s management in cooperation with the human resources, in order to cope with the demands of modern challenges.
He assured of the support of the State, with the aim of achieving mutually beneficial results.

The CEO of HAI, Mr. Demetrios Papacostas, said: « 2022 will be a year of great progress for HAI. The company is constantly expanding its activities, taking credit from its partners, while through the educational programs being developed for hundreds of young people from the United Arab Emirates and Bahrain is exporting technology and know-how. In the last year, HAI has achieved positive financial results, ensuring that during this year will be even more competitive. This is the Aerospace Industry that the country needs». 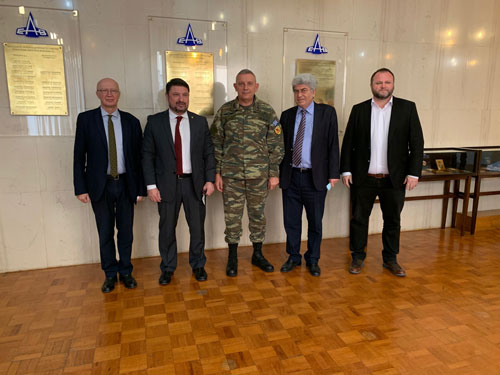