The company pursues penetration and establishment in new markets

The Hellenic Aerospace Industry was part of the Hellenic MoD delegation headed by the Minister of National Defense at an official visit in Armenia and India.

In this context, a meeting was held in Armenia where HAI presented its capabilities to the Head and the Executives of the Defense Industrial Department and discussed about the perspective of cooperation with the Armenian Armed Forces in certain programs/solutions within the wide-range of HAI’s activities.

HAI’s presence in India, on the occasion of the official delegation’s visit, was of particular importance, mainly due to the contract that HAI has with the Indian company TATA Advanced Systems Ltd (TASL). The contract concerns manufacturing of part of Air-to-Air Refueling Systems for fighter aircraft.

Moreover, HAI executives participated in the INDO-HELLENIC DEFENSE INDUSTRY INTERACTION, held in New Delhi on 19/12/2015 in the presence of the Minister of National Defense Mr. Kammenos. In this framework, HAI’s Vice Chairman Mr. Papaspyros met with the TASL CEO Mr. Sukaran Singh. Also, during the forum sessions, HAI presented a general overview of the company to the aeronautical and defense industries of India and conducted meetings with certain Indian companies aiming to explore perspectives of cooperation. 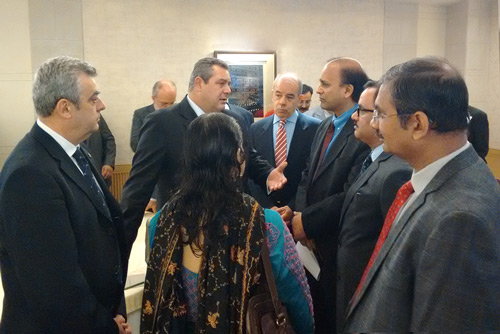