His Excellency Mr. David Pearce, the Ambassador of the United States in Greece, held an official visit today at Hellenic Aerospace Industry’s (HAI’s) facilities in Tanagra. The U.S. Ambassador was accompanied by high ranking members of the Office of Defense Cooperation, headed by ODC Chief Commander Mr. Michael Biery. Officers from the Hellenic Airforce and executives from Lockheed Martin Aeronautics also participated.

The delegation was given a tour to HAI’s facilities with emphasis on the Aircraft and Aerostructures plant where HAI implements important F-16 and C-130J aircraft projects as a Sole Source Supplier, worldwide, for Lockheed Martin.

The management of HAI presented to the Ambassador and the delegation the company’s activities, strategy and goals as well as the specific business relations with U.S. Air Force and the American companies. Discussion agenda also focused on the prospects of expanding existing cooperation and establishing new ones.

Of high importance is the cooperation with Lockheed Martin. It is reminded that HAI recently signed a contract with Lockheed Martin for the five-year (2015-2019) extension of the C-130J aircraft co-production program. The total value of the new contract is approximately USD 72 mil. 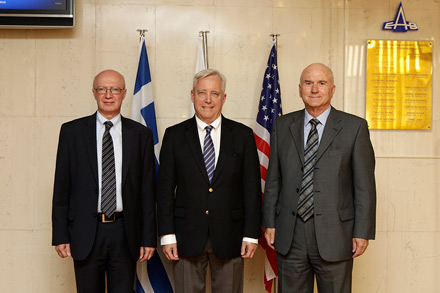