The management of HAI presented the company’s activities, strategy and goals as well as the specific business relations with U.S. Air Force and American companies. The discussion agenda also focused on the prospects of expanding current cooperation and establishing new areas for collaboration.

The delegation was given a tour of HAI’s facilities with emphasis on the Aircraft and Aerostructures plant where HAI implemented or is currently implementing important programs such as P-3B aircraft (PDM & Middle Life Upgrade), C-130H (PDM, SMP, AUP), F-16 (CCIP-Structural & Avionics Upgrade), Manufacturing and assembly of panels for C-130J and LM-100, as well the UH-60M side panels manufacturing and assembly.

The Ambassador of the United States commented positively on HAI’s capabilities and performance, and expressed his confidence that there are good prospects for the expansion of cooperation with U.S. companies in new areas that may prove beneficial for both sides.

The General Director of GDDIA underlined that Hellenic Aerospace Industry has decisively contributed to the support of the Hellenic Armed Forces and has considerable technological capabilities to undertake programs of strategic importance for the defence sector of the country. 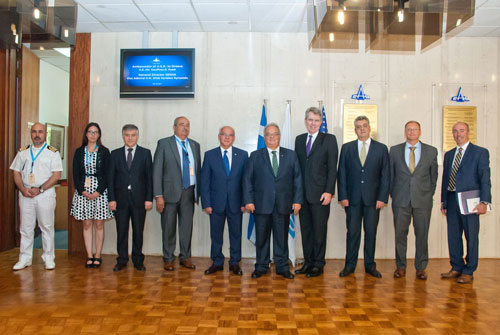