A basketball game full of love was organized, yesterday, at the AENK Municipal Gymnasium - "Dimitrios Vikelas", in Kifissia. The basketball team of ΗΑΙ and the Flyers of Lockheed Martin played on the court, in order to support the Parents’ Association of Children with Cancer "Floga".

An “assist” given by the amateur players filled the basket and fulfilled the charity goals to raise money for the children of “Floga”.

The stadium seats were full. More than 200 fans, many members of the «Floga» Association and representatives of HAI, Lockheed Martin Aero and the Municipality of Kifissia attended the charity game. Among others, the CEO of HAI, Mr. Dimitrios Papacostas, the director of Lockheed Martin Aero Greek Operations at Hellenic Aerospace Industry, Mr. Charles Akers (Mr. Akers also participated in the game), the Deputy Mayor of the Municipal Unit of Ekali and Commissioner for Sports Mr. Achilleas Kourepis, the President of the EKA Basket "Nikos Galis" Mr. Petros Kelis and the "spider" of Greek basketball, Panagiotis Fassoulas were present.

During the game, the spectators had the opportunity to achieve their own "3-pointers of life" by supporting the "Floga" Foundation financially through the purchase of coupons.

Colleagues and concerned citizens responded to the call of the organizers, who had the opportunity to enjoy the spectacle, moral, and fair play.

At the end of the game, the two teams gave the amount raised, to the president of "Floga", Mrs. Maria Tryfonidou - who herself is a former employee of HAI - as a contribution to the commendable work of the Foundation.

For the story, the game winner was the HAI basketball team, with a score of 72-41. 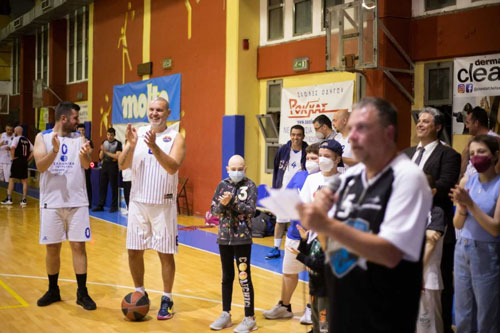